Walking Dead and Game of Thrones panels at Comic-Con 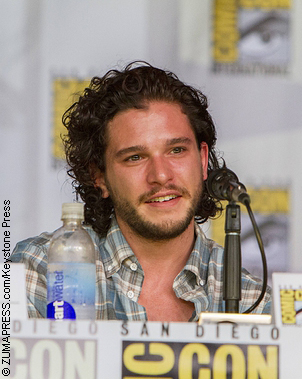 As the anticipation for Comic-Con 2014 heats up, here are some of the panels to look forward to! The Walking Dead panel will be in the legendary Hall H and we’ll be waiting for news on who new series regular Seth Gilliam will play. Our guess: Father Gabriel Stokes.

Focus Features is creating buzz in Hall H with their stop-motion animation movie The BoxTrolls, but if they stray from their family oriented focus, perhaps they’ll also drop footage and news about Fifty Shades of Grey, since the trailer is being released tomorrow as well.

Fan favorite Game of Thrones always creates buzz and the panel will take place on Friday, July 25 at in Hall H at 1:40 p.m. Following the panel, the stars will then be off to sign autographs at the Warner Bros. Pictures booth at 3:30 p.m., including Nikolaj Coster-Waldau, Kit Harington (pictured above), Maisie Williams, Natalie Dormer, Rose Leslie, Rory McCann, Pedro Pascal, Sophie Turner, Gwendoline Christie and John Bradley. Show runners David Benioff and Dan Weiss will also be there, and we’re anxious to hear more from them about heading to Dorne next season. Author George R.R. Martin will also be part of the panel. ~Andrea Hodgins