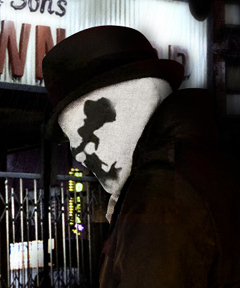 Watchmen fans were temporarily confused when they spotted a man wearing a white cloth mask, black sunglasses, black fedora and cloak at a Hollywood book store last Friday. It turned out to be Michael Jackson, but other customers mistook him for Roschach, a character from the Watchmen movie and quickly mobbed the singer, saying, “Omigod I love you—is The Comedian here too?!” according to defamer.com.au. Despite not knowing what they were talking about, Jackson graciously signed autographs for the enthused Watchmen fans.