Watts to star with Hanks in Da Vinci code prequel 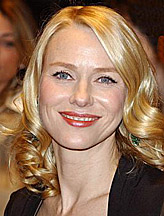 Naomi Watts has just landed the co-starring role in Angels & Demons opposite Tom Hanks, but unfortunately filming has been postponed due to the writers’ strike. The movie is a prequel to The Da Vinci Code, with Hanks reprising his role as Robert Langdon and Ron Howard returning to direct. The release date has changed from December 2008 to Spring 2009. In the meantime, Watts will be next be seen on the big screen in August, starring opposite Clive Owen in The International.