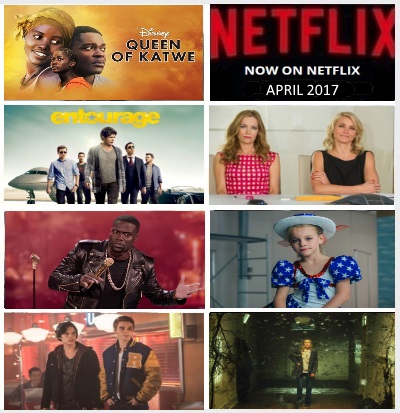 With Spring in the air, Netflix promises a shower of entertaining fixes of original TV shows and movies, along with some fan favorite flicks. From a JonBenét documentary to Adam Sandler’s new film Sandy Wexler, there’s something for everyone.

Originals
Once you have binged on Marvel’s Iron Fist as well as the Selena Gomez-produced series 13 Reasons Why, both of which debuted last month, then here’s what to get started on. Adam Sandler is the talent manager to look out for in Sandy Wexler. If you’re missing some drama in your life, Riverdale has plenty of it in their weekly episodes.

Laugh it Out
Adrian Grenier is more than a pretty face as he brings his A-game in the movie Entourage, along with the rest of the gang from the show in this comedy. Kevin Hart takes a dig at Siri and jokes about airport washroom problems in his stand-up comedy movie Kevin Hart: What Now. Cameron Diaz, Leslie Mann and Kate Upton team up to get revenge on the man cheating on all of them in The Other Woman.

Adrenaline-pumping
For horror lovers, The Lazarus Effect is a heart-thumping film as a group of medical research students bring their dead colleague back to life, and well, something else too. For a less scary film, a thriller I would recommend watching is Before I Wake. This story follows a couple who adopt a young boy and when he finally falls asleep, strange things happen in the house. Yup, this is a horror too, but not many jump scares.

Dramance
Let Jack and Rose set your heart on fire as you root for this unlikely couple and tear up at their tragic end. Yes, Titanic is going to be available for your guilty pleasure this month. Michael Fassbender and Alicia Vikander give us all the feels in the drama The Light Between Oceans.

Our picks
The documentary Casting JonBenét hits the site this month. It explores one of the world’s most sensational child murder cases, the still unsolved death of six-year-old American beauty queen, JonBenét Ramsey. If that’s not up your alley, Disney’s Queen of Katwe is an inspirational film about finding hope and never giving up.