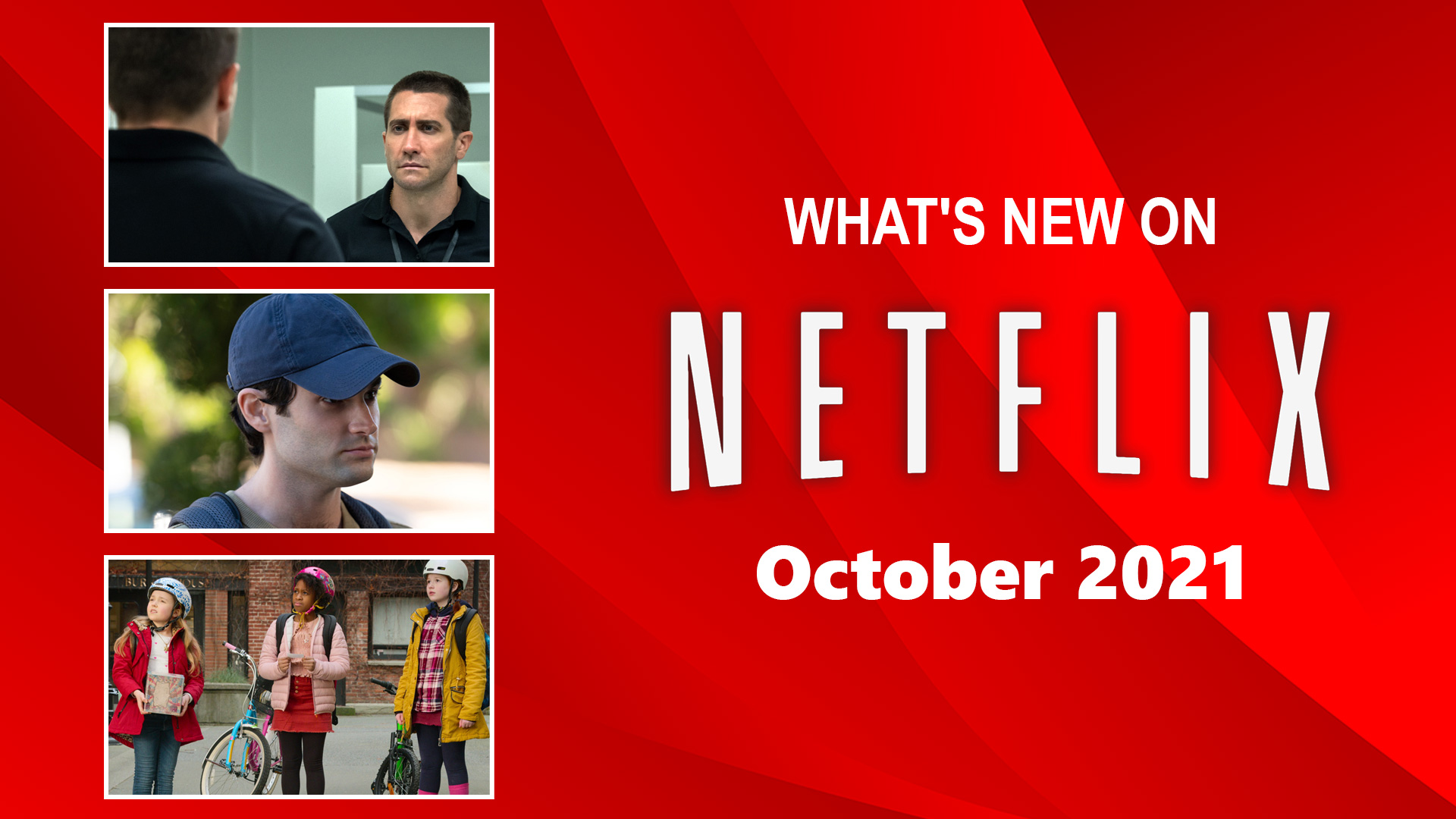 With Halloween on the way, Netflix has you covered! They have a number of spooky movies and series to get you in the mood — but that’s not all, there’s an entire month with a variety of new productions to enjoy, from drama films to new comedy series to true crime stories. Check out the best original movies and TV shows coming to Netflix this October below and click here for our photo gallery of October originals! ~Alexandra Heilbron

🎃 Scary Shows and Movies to prep you for Halloween!

Scaredy Cats – October 1
On Willa Ward’s (Sophia Reid-Gantzert) 12th birthday, she inherits a beautiful cat amulet necklace that belonged to her mother, whom she discovers was a witch. When she learns that two bad witches are after her locket for its power, she and her best friends Scout (Ava Augustin) and Lily (Daphne Hoskins) must learn to use the necklace and Willa’s witch powers to defeat the bad witches and save their town.

There’s Someone Inside Your House – October 6
Makani Young (Sydney Park) has moved from Hawaii to quiet, small-town Nebraska to live with her grandmother and finish high school, but as the countdown to graduation begins, her classmates are stalked by a killer intent on exposing their darkest secrets to the entire town. With a mysterious past of her own, Makani must discover the killer’s identity her new friends become victims themselves.

A Tale Dark & Grimm – October 8
In this animated series, Hansel and Gretel run away from home to find better parents…or at least ones who won’t chop off their heads. As they walk out of their own story and venture through other classic Grimm fairy tales, the siblings learn the true story behind the famous tales.

Fever Dream – October 13
A young woman lies dying far from home. A boy sits beside her. She is not his mother. He is not her child. Together, they tell a haunting story of broken souls, an invisible threat, and the power and desperation of family. Based on the critically acclaimed novel by Samanta Schweblin.

Sharkdog’s Fintastic Halloween – October 15
The Sharkpack gets ready for Halloween with the spooky legend of the “Fearsome Fog” — and Sharkdog must save trick-or-treating from a slimy sea monster!

Night Teeth – October 20
College student Benny (Jorge Lendeborg Jr.) is moonlighting as a chauffeur when he picks up two mysterious women (Debby Ryan, Lucy Fry) for a night of party-hopping across Los Angeles. But when he uncovers their bloodthirsty intentions — and their dangerous, shadowy underworld — he must fight to stay alive.

Locke & Key: S2 – October 22
After their father is murdered under mysterious circumstances, the three Locke siblings and their mother move into their ancestral home, Keyhouse, which is full of magical keys that may be connected to their father’s death. As the children explore the different keys and their unique powers, a mysterious demon awakens.

Hypnotic – October 27
A young woman seeking self-improvement enlists the help of a renowned hypnotist, but after a handful of intense sessions, soon discovers unexpected and deadly consequences.

A Sinister Sect: Colonia Dignidad – October 1
This new documentary series uncovers the truth behind a German Nazi sect that was established in Chile in 1961 by charismatic and manipulative leader Paul Schäfer, who had been part of the Hitler Youth in Germany. The sect was involved in a number of scandals, including pedophilia, arms trafficking, murders, kidnappings and slavery.

House of Secrets: The Burari Deaths – October 8
Suicide, murder… or something else? This docuseries examines chilling truths and theories around the deaths of 11 members of the Chundawat family from Burari, Delhi.

The Motive – October 27
Decades after a 14-year-old boy brutally killed his parents and two sisters in Jerusalem in 1986, this documentary revisits the horrifying crime. Through all the years that have passed, everyone continues to be disturbed by the dissonance between the character of the small, bespectacled boy who was so composed, brilliant, and kind – and the monstrous massacre that he committed.

Diana: The Musical – October 1
With music and lyrics by David Bryan, the dazzling and devastating life of Princess Diana takes center stage in this original musical, filmed in advance of its official Broadway opening.

One Night in Paris – October 14
Mixing sketches with rapid-fire sets, this special brings together top comedians from France’s stand-up scene as they explore life during the pandemic.

Flip a Coin: ONE OK ROCK Documentary – October 21
Unable to tour in 2020, the members of the Japanese rock band ONE OK ROCK work for months to put on an online concert that matches the energy of their in-person shows.

Forever Rich – October 1
When rising rap superstar Richie’s (Jonas Smulders) precious watch is stolen during a violent robbery, the thieves record it in order to embarrass the young performer. The humiliating video goes viral and pushes him into a battle for redemption — over the course of one long night.

The Guilty – October 1
When 911 operator Joe Baylor (Jake Gyllenhaal) receives a cryptic call from a woman (Riley Keough) who seems to be discreetly reporting her own abduction, he uses his experience as a former police officer to try to find her location and save her.

MAID – October 1
Alex (Margaret Qualley) is a single mother who turns to housecleaning to — barely — make ends meet as she escapes an abusive relationship and overcomes homelessness to create a better life for her young daughter in this new series. Inspired by the New York Times best-selling memoir, Maid: Hard Work, Low Pay, and a Mother’s Will to Survive by Stephanie Land.

The Billion Dollar Code – October 7
In 1990s Berlin, an artist and a hacker invented a new way to see the world. Years later, they reunite to sue Google for patent infringement on it.

Pretty Smart – October 8
Book-smart Chelsea (Emily Osment) discovers she has a lot to learn about happiness when she’s forced to move in with her bubbly sister and three eccentric roommates.

The King’s Affection – October 11
When the crown prince is killed, his twin sister assumes the throne while trying to keep her identity and affection for her first love a royal secret.

Colin in Black & White – October 29
This drama series from Colin Kaepernick and Ava DuVernay explores Kaepernick’s high school years and the experiences that led him to become an activist.

Family Business: S3 – October 8
Whisked off to a remote monastery, the Hazans contend with volatile captors, a mind-bending new product line and a doozy of a family secret.

The Baby-Sitters Club: S2 – October 11
As demand for their club continues to grow, founders Kristy Thomas (Sophie Grace), Mary-Anne Spier (Malia Baker), Claudia Kishi (Momona Tamada), Stacey McGill (Shay Rudolph), and Dawn Schafer (Xochitl Gomez) have now welcomed Mallory Pike (Vivian Watson) and Jessi Ramsey (Anais Lee) to their ranks. With the new school year comes booming business, new relationships, personal journeys, and important lessons, but through it all the girls are there for each other every step of the way.

The Movies That Made Us: S3 – October 12
Insiders reveal the stories behind more of your favorite megahits, including Aliens, A Nightmare on Elm Street, Coming to America and The Nightmare Before Christmas in this funny, eye-opening docuseries.

Another Life: S2 – October 14
The stakes couldn’t get higher as astronaut Niko Breckenridge (Katee Sackoff) and her crew witness the annihilation of a planet. How do you negotiate with aliens capable of such brutality?

You: S3 – October 15
Joe (Penn Badgley) and Love (Victoria Pedretti), now married and raising their baby, have moved to the balmy Northern California enclave of Madre Linda, where they’re surrounded by privileged tech entrepreneurs, judgmental mommy bloggers and Insta-famous biohackers. Joe is committed to his new role as a husband and dad, but fears Love’s lethal impulsiveness. And then there’s his heart. Could the woman he’s been searching for all this time live right next door? Breaking out of a cage in a basement is one thing. But the prison of a picture-perfect marriage to a woman who’s wise to your tricks? Well, that’ll prove a much more complicated escape.

Luis Miguel – The Series: S3 – October 28
While overcoming personal struggles, Luis Miguel contemplates sharing his life story. In the ’90s, he strikes up a relationship with Mariah Carey.

Pokémon the Movie: Secrets of the Jungle – October 8
Koko grows up in the jungle with a solitary Zarude. When he meets Ash and Pikachu, he discovers the human world — and a plot threatening his home!

Mighty Express: S5 – October 12
The Mighty Express trains team up on the tracks to deliver a huge rubber ducky, a giant robot and tons of pizza on exciting mega missions!

Gabby’s Dollhouse: S3 – October 20
Gabby, Pandy and their crew of kitty friends are back with even more special deliveries, surprising journeys and make-at-home lessons, too!

For even more originals coming out in October including a photo for each one, click here to see our photo gallery!

October 6
A Million Ways to Die in the West
About a Boy
Bad Sport
Baking Impossible
Despicable Me
Despicable Me 2
Drag Me to Hell
Dragonheart
Fear
The Five Juanas
Land of the Lost
Love Is Blind: Brazil
Minions
There’s Someone Inside Your House
The Thing
Werewolves Within

October 12
Bright: Samurai Soul
Convergence: Courage in a Crisis
Making Malinche: A Documentary by Nacho Cano
Mighty Express: Season 5
The Movies That Made Us: Season 3

October 19
In for a Murder / W jak morderstwo

October 27
Hypnotic
Nobody Sleeps in the Woods Tonight Part 2
Sintonia: Season 2
This Is Us: Season 5

Spend a night at the Scream movie house through Airbnb!

This Halloween, Airbnb is giving movie enthusiasts the chance to have an immersive experience by spending a night at the Scream house featured in the film!