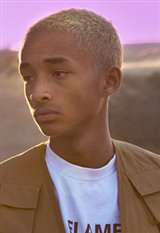 JADEN SMITH Date of Birth: July 8, 1998 Born in Malibu, California, Jaden Smith is the son of actors Will Smith and Jada Pinkett Smith. At the age of five he made his acting debut on the WB TV sitcom All of Us, co-created and co-produced by his parents. He played Reggie, while his older half-brother Trey Smith played Darryl. In 2006, Jaden made his film debut in the Sony release The Pursuit of Happyness, playing his father's son. When Will was reading the script prior to shooting, Jaden asked... See All