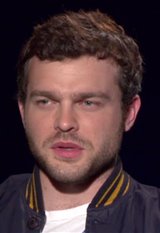 ALDEN EHRENREICH Date of Birth: February 7, 1990 Born in Los Angeles, Alden Ehrenreich showed interest in acting from a young age, when he imitated Sebastian the Crab from the animated movie The Little Mermaid. Growing up in Pacific Palisades, he studied acting at Crossroads School Theater and obtained his gift of imagination and powerful storytelling from his interior designer mother. At a young age, he began making short films, a talent that aided in his discovery. One of his shorts, a comedy... See All