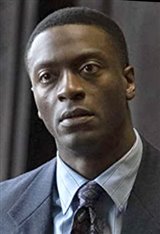 Best known for playing Alec Hardison on the TNT series Leverage (2008-2012), and Noah on the WGN series Underground (2016-2017), Aldis Hodge has demonstrated his versatility as an actor in both film and television. Aldis Hodge was born in Onslow County, North Carolina but was raised in New York City. His father is originally from Saint Thomas, U.S Virgin Islands, and his mother is from Florida. They both served in the U.S. Marine Corps. He grew up alongside his older brother, Edwin Hodge, who is... See All