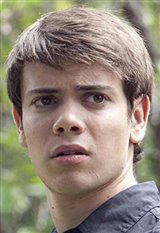 ALEXANDER GOULD Date of Birth: May 4, 1994 Alexander Gould’s career took off in 2000 when he was just six years old. He landed a guest appearance on the TV show Freaks and Geeks, another guest appearance on the hit sitcom Malcolm in the Middle, a role in an independent film called Mexico City and was chosen as the voice of Nemo in Disney’s feature film Finding Nemo (2003). Animation films take several years from start to finish, so by the time the film was released to theaters, Alexander was... See All