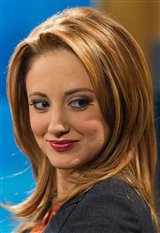 Born and raised in Whitley Bay, Tyne and Wear, England, Andrea Riseborough began performing at a young age. As a child, she has referred to herself as "geeky" and preferred to read plays than watch cartoons. After being bored in school, she dropped out and took on some part-time jobs before securing a place at London's Royal Academy of Dramatic Arts (RADA). Since graduating in 2005, she has been busy acting in many different venues including film, stage and television. The actress has gained... See All