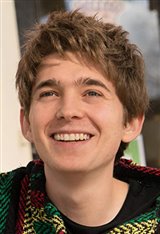 Austin Abrams grew up in Sarasota, Florida. His parents are both doctors and when he was five, his mother enrolled him in an acting camp. He's most recognized for his roles on the popular series The Walking Dead, the 2015 film Paper Towns and for his role as Ethan on the hit HBO series Euphoria, which has been renewed for a second season. Austin is also in pre-production for the Netflix series Dash & Lily in the role of Dash, and can currently be seen starring in the coming-of-age romance... See All