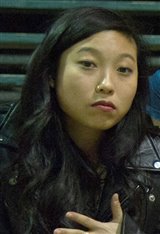 Born Nora Lum, rapper-actress Awkwafina grew up in Forest Hills, Queens, the daughter of a Chinese-American father and a South Korean immigrant mother. Following her mother’s death when she was four years old, Lum was raised by her grandmother. When she was 10, Lum was offered a part in her junior high school’s band as a trumpet player, which inspired her to become a concert trumpeter. However, after she discovered online music production software, she produced hip-hop beats and eventually... See All