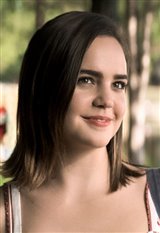 Bailee Madison was born in Fort Lauderdale, Florida, and is the youngest of seven siblings. She began her acting career when she was just two weeks old, appearing in an Office Depot commercial. She also did commercials for Cadillac, Disney, and SeaWorld. Bailee made her big screen debut in the film Lonely Hearts (2006), which starred John Travolta, James Gandolfini and Salma Hayek. She began to receive recognition the year after as May Belle Aarons in the film Bridge to Terabithia, starring... See All