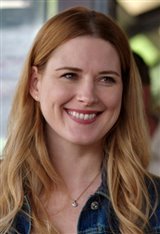 Alexandra Breckenridge was born in Bridgeport, Connecticut and lived in Darien, Connecticut until the age of 11, when she moved with her mother to California.

The niece of actor Michael Weatherly, Alexandra became interested in performing in her early teens. By the time she was 15, she was landing onscreen roles, including in the TV movie Even the Losers (1998), starring Aaron Paul and directed by former child star Sara Gilbert.

Guest roles on popular teen series followed, including Freaks and Geeks and Dawson's Creek, both in 2000. The same year she landed a three episode recurring role on the Fox series Opposite Sex starring Milo Ventimiglia. She played her first credited role in a motion picture in Big Fat Liar (2002), starring Frankie Muniz and Amanda Bynes.

More television guest appearances came her way on shows such as Charmed and Buffy the Vampire Slayer (both 2002); CSI: Crime Scene Investigation and JAG (both 2004); and Medium (2005).

She once again landed a role in a film starring Amanda Bynes with She's the Man (2006), playing the role of Monique.

Her biggest role to date is the starring role of nurse practitioner Mel Monroe on the popular Netflix drama, Virgin River (2019 to 2020), which has enjoyed two seasons so far.

Alexandra married guitarist Casey Hooper on September 13, 2015 in Colorado. They live just outside Atlanta, Georgia with their two children — a son, Jack, born September 3, 2016 and a daughter, Billie, born December 6, 2017.

In her spare time Alexandra takes photographs and has had her work featured in several galleries. She also enjoys sewing and making quilts, and collects vintage black-and-white Hollywood photographs.