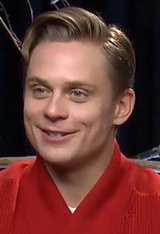 While initially drawn to athletics thanks to his parents—his mother being an aerobics instructor and his father a professional bodybuilder and kickboxer—Billy shifted towards the arts. Robin Williams was a big inspiration for him and he calls the late comedian and actor his idol. From there, he studied at the University of North Carolina School of the Arts.

Billy began his acting career on stage in 2007 with the Broadway play The Ritz, which starred Rosie Perez. A year later he would make his screen debut appearing in an episode of the TV series Law & Order. In 2009 Billy would appear in his first film, the dramedy Happy Tears starring Parker Posey, Demi Moore and Rip Torn.

Onstage he was cast alongside David Hyde Pierce and Sigourney Weaver in Christopher Durang’s Vanya and Sonia and Masha and Spike, which was nominated for six Tony Awards, including one for "Best Featured Actor" nomination for Billy.

Billy would break into the mainstream with Rob Marshall’s 2014 adaptation of the musical Into the Woods, playing Rapunzel’s Prince. A year later he would appear in the Oscar-nominated films The Big Short and Bridge of Spies as well as the small budget films I Smile Back, The Meddler and The Great Gilly Hopkins.

From there his credits and profile would continue to rise with appearances on shows such as FX’s American Crime Story (2016), Netflix’s Unbreakable Kimmy Schmidt (2017), and BBC’s Black Mirror (2017). He would also go on to star as Nathan Hill on Epix’s TV series adaptation of the film Get Shorty (2017), and play the lead role of Jed Milgrim on Netflix’s Maniac (2018).

On the big screen Billy would continue to diversify his resumé with minor and supporting roles in films such as the biographical drama Birth of the Dragon (2016), the indie dramedy Ingrid Goes West (2017), the dark comedy Game Night (2018), the comedy thriller The Oath (2018), and the psychological thriller Velvet Buzzsaw (2019).

Most recently, Billy was seen in Disney’s live-action remake of Aladdin (2019), playing the role of Prince Anders, a potential suitor for Princess Jasmine. On television, he starred on the CBS All Access’ psychological thriller series Tell Me a Story (2018-2019).

Billy has filmed the role of Ash in the latest James Bond movie, No Time to Die (2020) and he is currently working on the first season of the new HBO Max drama series Made for Love (2020), alongside Ray Romano and Cristin Milioti.

Outside of acting, Billy is a musician and when he's not acting, finds time to play guitar for a band called Reserved for Rondee in New York City. He was formerly the bassist and contributing songwriter for another New York City Band rock band called The Dash.

Billy is the eldest of three boys.