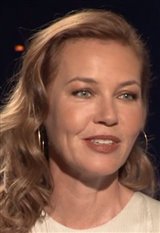 Born in Copenhagen, Denmark, Connie Nielsen began her career at the age of 15, working alongside her mother in local revues and variety shows. At 18, she headed to Paris to pursue her acting career. "I went, at first, just with the intent to see it. Then I did Le Paradis Absolument in France and was given the possibility of staying there. I realized that if I wanted to do this seriously, I'd have to get some formal training." This led to further work and study in Rome, Milan, South Africa, and New York.

She eventually crossed the pond in the early '90s. "I attracted the interest of some American agents, and they told me if I wanted to work over here, I had to live here. So, I decided to give it six months just to see what happened. The month after I arrived, I got a part in a poorly reviewed TV movie with Rutger Hauer and Eric Roberts called Voyage.

Despite the bad reviews, Connie went on to land a role as Satan's daughter in The Devil's Advocate (1997), which became her breakthrough performance. The following year she was in three films, including a co-starring role with Kurt Russell in Soldier (1998).

Connie has worked steadily since then, with roles in films such as Mission to Mars (2000) with Gary Sinise, the blockbuster Gladiator (2000) with Russell Crowe, One Hour Photo (2002) with Robin Williams and The Hunted (2003), starring Benicio Del Toro. For her role in Brothers (2005), she won the Silver Seashell at the San Sebastian International Film Festival and the Best Actress award at the Bodil Awards.

On the small screen, she played the role of Corinna on all six episodes of the TNT mini-series I Am the Night (2019), starring Chris Pine.

In addition to acting, Connie is also a trained singer and dancer, and is fluent in English, German, Danish, Swedish, French and Italian.

Never married, Connie has a son, Sebastian (born November 26, 1989), from a relationship with Italian actor Fabio Sartor. From 2004 to 2012, she was in a relationship with Lars Ulrich, the drummer for the metal band, Metallica. They have a son, Bryce Thadeus Ulrich-Nielsen (born May 12, 2007).