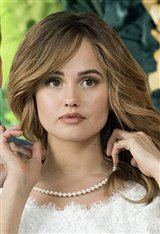 Debby Ryan was born in Huntsville, Alabama, and made the decision to pursue acting as a full-time career at the age of 10. Her father was in the military and so she spent much of her childhood moving all around Europe. While living in Germany, she decided that acting was her future and began performing in professional theatres on an American base. Her family returned to the US in 2003, but Debby did not begin her career until she was a teenager.

Between 2006 and 2008, Debby appeared as a teenage character on Barney and Friends and also acted in some television commercials. Her first film role was in Barney: Let’s Go to the Firehouse (2007), which she followed up with a role as Edith in the family comedy Longshots (2008) alongside Ice Cube and Keke Palmer.

During this time, she starred in the young adult TV movie 16 Wishes. After the television series The Suite Life on Deck ended, Debby was cast as the star of a new Disney Channel show: Jessie, as the titular character.

Debby has made several attempts to shake her good girl Disney Channel image. While filming Jessie, she formed the band The Never Ending and went on tour with Fifth Harmony. She has also starred in YouTube Red’s web series, Sing it! as egocentric singer and show judge Holli Holiday.

Most recently, Debby appeared as mean girl Jennifer alongside Melissa McCarthy in the comedy Life of the Party (2018) and stars on the Netflix series Insatiable as a girl who becomes popular after losing a lot of weight, but wants revenge on those who bullied her.