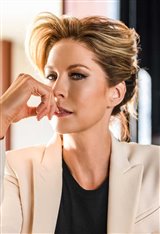 The daughter of a Hughes Aircraft executive and a homemaker, Jenna Elfman was born and raised in Los Angeles. While still quite young, she thought she might like to become a nun, but it soon became clear that she had the soul of an entertainer. Following her graduation from high school, she went on to attend one and a half semesters of college at Cal-State Northridge when she found that higher education held little appeal for her, so she moved across town to look for work in Hollywood.

Trained in classical dance from the age of five, the nineteen-year-old's first instinct was to become a ballerina, and she briefly considered joining Seattle's Pacific Northwest Ballet Company. Though overstressed ankles from years of pointe dancing ultimately tipped the scales against the classical form, a gig in the 1991 Academy Awards extravaganza launched Elfman's career as a dancer for television and film productions. Her accumulated experiences performing on such primetime network stalwarts as Murder, She Wrote eventually sparked in her a serious interest in acting. She enrolled at the Beverly Hills Playhouse, and commercial work for AT&T, Sprite, Clearasil, and Honda helped pay the bills and gained the rookie valuable experience in front of the camera. At the same time, Elfman kept her dance instincts sharp: one of her more notable gigs was joining ZZ Top's 1994 World Tour as a "Legs Girl."

Shortly thereafter, Elfman secured the services of an agent, with whose help she began to win more substantial, if still relatively minor, acting jobs in a string of episodes of shows as diverse as Roseanne and NYPD Blue. In the summer of 1996, she filmed a brief part in her first feature film, Grosse Pointe Blank. By the time studios began casting for fall television pilots, Elfman had made a resolution to score a part in the cast of a new series, and before too long, she managed to land a recurring role in the ABC sitcom Townies. Starring opposite former eighties queen of teen screen Molly Ringwald, Elfman made a splash in the supporting role, stealing whatever glory there was to be gained from Ringwald.

Both ABC and Twentieth Century Fox rushed in to woo Jenna with do-it-your-way development deals the very same day the six-episode loser was given the official axe. The energetic actress found herself torn between the greater freedom of a production pact with a major studio and a sense of loyalty to the network that jump-started her television career. She solved her dilemma by inking a deal with Fox and pitching her first project, a sitcom called Dharma & Greg, to execs at ABC. Mere months after Townies had already become a minor footnote in TV history, Dharma & Greg, Jenna's starring vehicle, entered advanced stages of production. Knowing the casting of her costar would be critical to the success of the show, she dismissed an entire roomful of potential Gregs before picking Thomas Gibson, fresh from a critically applauded year on Chicago Hope. With an infectious chemistry between Jenna and Gibson, Dharma & Greg became one of 1997's breakout TV triumphs.

While Dharma & Greg keeps racking up the ratings points, Jenna is driven to also conquer the silver screen. She had her first shot with a starring role opposite Richard Dreyfuss in Disney's spring 1998 release Krippendorf's Tribe, in which she played an anthropologist who goes to great lengths to secure a government grant; and she joined the cast of the 1999 Ron Howard comedy EDtv, which co-starred fellow sit-comedienne Ellen DeGeneres and Matthew McConaughey. She costarred with Edward Norton and Ben Stiller in Norton's directorial debut, Keeping The Faith, playing a beauty queen that both a rabbi and a priest fall for.

In 2017, Jenna starred as Alice on the ABC TV sitcom Imaginary Alice, about a woman whose imaginary companion from childhood returns and stirs up trouble. Since 2018, she has been playing a starring role on the AMC spinoff TV series Fear of the Walking Dead.

Since 1995, Jenna has been happily married to actor Bodhi Elfman, whom she met at an audition for a Sprite commercial. The effervescent actress and her husband are practicing Scientologists, and they have two children.