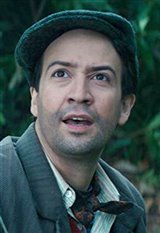 Lin-Manuel Miranda is much more than just an actor. Born and raised in New York City, he is also a rapper, lyricist, and composer. Miranda attended Wesleyan University in Connecticut where he wrote and directed several musicals and acted in many of the productions. In his sophomore year, Miranda wrote his first draft of the musical In the Heights, which was accepted and performed by Wesleyan’s theater company, The Second Stage. Three years later, Miranda worked with director Tommy Kail to write and dissect five different drafts of the musical, which finally hit Broadway in 2008.The show was such a success that it was named a finalist for the 2009 Pulitzer Prize for Drama. Among his many awards, the play won Miranda the 2008 Tony Award for Best Original Score and a 2009 Grammy Award for its Original Broadway Cast Album.

Since then, Miranda has contributed two new songs to the revised version of the Stephen Schwartz and Nina Faso’s 1978 musical Working. He also composed and acted in the 2009 revival of The Electric Company and was given the opportunity to collaborate with Arthur Laurents and Stephen Sodheim on Spanish translations for the 2009 revival of West Side Story.

In 2016 he won a Pulitzer Prize for Drama for writing the book, music, and lyrics for the smash Broadway hit, Hamilton: An American Musical. That same year, he won two Tony Awards: one for Best Book of a Musical and the other for Best Original Score. He was also nominated for Best Actor in a Musical for his role starring role in Hamilton.

In addition to his music credits, Miranda has also appeared in guest roles on various television series. Some of these roles include Freddy Flapman on Sesame Street, Juan 'Alvie' Alvarez on House, and Guillermo on Modern Family. Miranda has also appeared in film as Pete in Clayton’s Friends (1996), as Raul in 200 Cartas (2012), and most recently as Reggie in The Odd Life of Timothy Green (2012) with Jennifer Garner and Joel Edgerton.

More recently, he played a starring role in the Disney sequel Mary Poppins Returns (2018), as a streetlighter named Jack, who's a friend of the title character.

Miranda is a member and co-founder of the hip-hop comedy troupe Freestyle Love Supreme. While the popular group regularly performs in New York City, it has also toured the Edinburgh Fringe Festival and has performed at comedy festivals in Aspen, Melbourne, and Montreal.

Miranda married Vanessa Nadal, his girlfriend of five years, in September 2010. They have two children together.