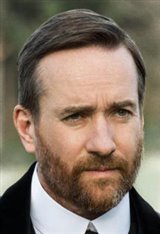 Born in Great Britain, Matthew Macfadyen comes by acting honestly. His mother was an actor/drama teacher and his grandfather also dabbled in directing amateur drama. His father, an oil industry businessman, moved the family for most of Macfadyen's childhood to such exotic places as the Far East and South America.

In his teens, Macfadyen was a drama scholar at Oakham School in Rutland, Leicestershire. From there, he went to the Royal Academy of Dramatic Art (RADA) and upon graduation, launched his onstage career with roles such as Antonio in Duchess of Malfi, Demetrius in A Midsummer's Night Dream for the Royal Shakespeare Company (RSC) and Benedick in Much Ado About Nothing.

His theater experience took him to Broadway on tour and back home, he was nominated for the National Theatre Ian Charleson award for "Best Classical Actor Under 30." Macfadyen made his television debut in a production of Wuthering Heights (1998) followed by a leading role in the BBC drama Warriors (1999), for which he received a Royal Television Society Best Actor award nomination.

In 2000, he made his film debut in Maybe Baby starring Hugh Laurie, then went on to play a role in Enigma (2001) starring Dougray Scott and Kate Winslet.

But it was in 2002, when he landed a regular role as M15 Senior Case Officer Tom Quinn in the BBC TV drama Spooks, that he became a household name in Britain. The series was a hit and he stayed with the show for two years.

A starring role as Mr. Darcy in a new production of Pride and Prejudice (2005) alongside Keira Knightley catapulted him to international fame. Although he works steadily in films such as The Current War (2018) and The Nutcracker and the Four Realms (2018), he also continues to return to his stage roots, and spent the spring and summer of 2005 starring as Prince Hal in William Shakespeare's Henry IV Parts 1 and 2 opposite Sir Michael Gambon as Falstaff at London's National Theatre.

Most recently, he can be seen in The Assistant (2020), alongside Julia Garner.

Macfadyen, who was named one "Ten Actors to Watch in 2005" by Variety magazine, married Spooks co-star Keely Hawes in 2004. They have a daughter, Maggie, and a son, Ralph.