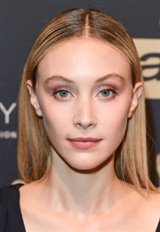 Toronto-born Canadian actress Sarah Gadon began performing at a young age. She spent most of her childhood training at The National Ballet School of Canada. In addition, Gadon studied Psychology at the University of Toronto and took Cinema Studies at Innis College.

Sarah made her TV debut at the age of 11 with a guest appearance on the TV series Nikita. Guest appearances on Canadian-filmed television shows such as Twice in a Lifetime, Life with Derek, Are You Afraid of the Dark? and Doc followed, all by the time she was 18 years old. She also appeared in the Disney Channel TV movie Cadet Kelly with Hilary Duff and the ABC Family channel TV movie Mom's on Strike opposite Spencer Breslin and Faith Ford. She continued to be a steady TV presence with recurring roles in The Border, Being Erica, Happy Town and Murdoch Mysteries before finding herself co-starring with Keira Knightley and Viggo Mortensen in David Cronenberg's A Dangerous Method, for which she was named one of TIFF's rising stars. She also played Lucie in The Moth Diaries (2011) and Robert Pattinson's wife in Cronenberg's Cosmopolis (2012).