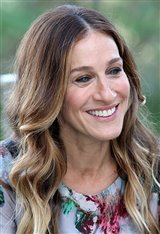 "What makes a real movie star is when you give the audience exactly what they want. Like with Woody Allen. We expect something from him, we enjoy it and want more of it. And I will never achieve that because that's my great fear—being the same."

Sarah Jessica Parker is not your average sex symbol. But she's become just that, thanks to roles ranging from the L.A. bubblehead in L.A. Story to the Manhattan sex columnist observing her friends' foibles in the TV series Sex and the City. Would you believe that there was once a time when directors didn't think Parker was pretty?

The Ohio native is the youngest of four children. Her father left home when Parker was a year old; two years later her mother married again, and eventually there were four more children.

As a child, Sarah's focus was art. She studied ballet and acting at the College Conservatory of Music in Cincinnati, and appeared in many performances. At the age of eight, she landed a small role on NBC's TV adaptation of The Little Match Girl.

When she and her brother were cast in the Broadway play The Innocents in 1976, the whole family picked up and moved to New York City to support the children's new profession. She continued to get parts, eventually becoming the third actress to star as Annie on Broadway after being cast as one of the orphans in the musical Annie.

Sarah was in Annie from age 12 to 14, and then kept right on working. In the process, she chose to give up ballet, though by now she was dancing with the prestigious American Ballet Theater.

In 1982, at the age of 17, she landed a starring role on the sitcom Square Pegs. She relocated to Los Angeles, but the series only lasted for a year, so Sarah quickly found other projects, including the 1984 ABC Afterschool Special The Almost Royal Family, the big screen feature Girls Just Want to Have Fun (1985) starring alongside Helen Hunt and Shannen Doherty, and the series A Year in the Life (1987-88).

When Steve Martin cast her in L.A. Story in 1991 playing the role of SanDeE*, Hollywood suddenly realized that the comedienne could also be a sexy woman. Her career blossomed, with films such as Honeymoon in Vegas, Ed Wood and The First Wives' Club.

Then came HBO's Sex in the City (1998 - 2004), in which Sarah starred as one of four single women negotiating life, love and sex in Manhattan. She won an Emmy and four Golden Globes for Best Performance by an Actress in a Comedy Series and returned to her role in the big screen sequels, Sex and the City: The Movie (2008) and Sex and the City 2 (2010).

Sarah has been married to fellow actor Matthew Broderick since May 1997. Their son, James Wilke Broderick, was born on October 28, 2002 in Manhattan. In 2009 they had twin daughters via a surrogate mother.