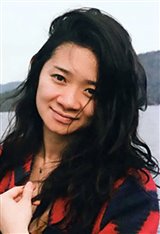 Chloé Zhao is a Chinese filmmaker best known for her work in American indie films, all of which have received tremendous amounts of critical praise. Zhao was born in Beijing, China. At the age of 14, she attended a boarding school in the U.K., where she learned English. She later moved to Los Angeles to finish her high school education, where she lived alone in a studio apartment in Koreatown. After studying political science at Mount Holyoke, she enrolled in the Graduate Studies film program at... See All