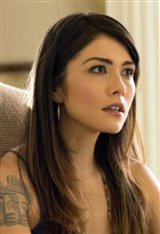 Daniella Pineda is a Mexican-American actress, writer, and comedian best known for her work on the fantasy supernatural drama The Originals and Jurassic World: Fallen Kingdom. Daniella was born in Oakland, California and is of Mexican descent. She attended Mills College, where she graduated with a degree in sociology and radio journalism. She made her television acting debut in 2010, appearing in an episode of Men of a Certain Age (2010), playing the role of Kit. Before paving her way into the... See All