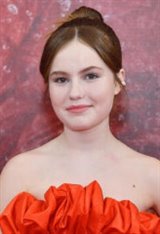 Darby Camp was born in Charlotte, North Carolina. As a toddler, she began appearing in locally filmed commercials and in print ads. She made her television debut on an episode of Drop Dead Diva, at the age of six. After making more appearances on television in small roles, by age nine she was cast as Reese Witherspoon's daughter on the HBO mini-series Big Little Lies, which went on to win eight Emmy Awards, as well as an AFI Award in 2018 for Best TV Program of the Year.   Before reprising the... See All