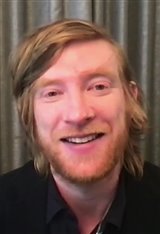 DOMHNALL GLEESON Date of Birth: May 12, 1983 Domhnall (pronounced Dough-null) Gleeson is an Irish actor, director and writer. He was born in Dublin and is the eldest son of actor Brendan Gleeson and Mary Gleeson. His father’s acting career, which took off with Braveheart when Domhnall was in high school, influenced his own aspirations. After earning a B.A. in Media Arts from the Dublin Institution of Technology, he made the choice to follow in his father’s footsteps. He found early success after... See All