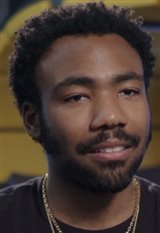 DONALD GLOVER Date of Birth: September 25, 1983 Donald Glover seeks to make an impact with his work, and with one Golden Globe already under his belt, it seems he's well on his way to doing just that. Donald McKinley Glover was born on Edwards Air Force Base, California to daycare center worker Beverly and postal worker Donald. He relocated to Stone Mountain, Georgia with his family, where he was raised a Jehovah's Witness. Due to his family's religious beliefs, he was forbidden from watching... See All