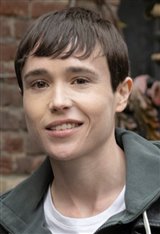 Born Ellen Page in Halifax, Elliot made his television debut at the age of 10 in the TV movie Pit Pony (1997). When it was turned into a TV series just over a year later, Page reprised her role as younger sister Maggie. Even at such a young age, she showed enormous talent, earning both a Genie nomination and a Young Artist Award nomination for her work in the series. From there, she played roles in two more Canadian series, Trailer Park Boys and Rideau Hall (both 2002). Although she made her... See All