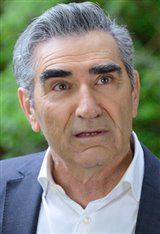 EUGENE LEVY Date of Birth: December 17, 1946 Born in Hamilton, Ontario, Eugene Levy attended McMaster University and was vice-president of the school's film board. Levy's first film came about when founding member of the film board Ivan Reitman, director of Ghostbusters and Six Days Seven Nights, cast Levy in Cannibal Girls in 1973. In 1976, Eugene joined the Toronto-based Second City Theatre and eventually met a circle of comics that would all go on to star in comedic films for years to come.... See All