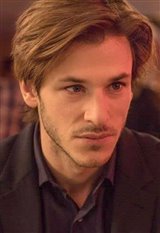 GASPARD ULLIEL Date of Birth: November 25, 1984 When Gaspard Ulliel was 12, a friend of his mother’s who’d just opened a talent agency was looking for kids to represent. Gaspard, who lived in a suburb of Paris, signed up out of curiosity, and began landing small parts in TV movies. He made his movie debut in the film Alias (1999) and went on to win a Lumiere Award as Most Promising Young Actor and a César Award nomination for his third movie, Embrassez qui vous voudrez (2002). His second César... See All