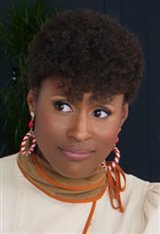 Born Jo-Issa Rae Diop in Los Angeles, she is better known as Issa Rae — writer, producer, director, actress and co-creator of the Emmy-award nominated HBO series Insecure. Her father is Dr. Abdoulaye Diop, a pediatrician and neonatologist from Senegal, while her mother Delyna Diop, is an African-American teacher from Louisiana. Her parents met while they were in school in France. Issa and her family moved around from Los Angeles to Dakar and later wound up in Potomac, Maryland. She grew up... See All