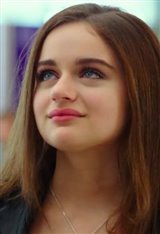 Joey King began her acting career at age four by appearing in nationwide commercials for AT&T, Eggo, Life Cereal and McDonalds. At age six, Joey made her way to television, appearing on television series such as CSI, Entourage and Medium. She has also lent her voice talents to the hit animated feature films Dr. Seuss' Horton Hears a Who! and Ice Age: Dawn of the Dinosaurs and appeared in several stage productions. Her first big break was playing Ramona in Ramona and Beezus (2010), opposite... See All