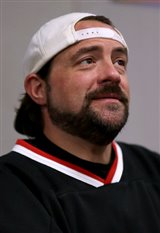 If there are three things that Kevin Smith's movies have in common it's this: plots that relate to each other, crass dialogue and recurring characters Jay and Silent Bob. Revered as one of the kings of independent film of the '90s, Smith was born the son of a postal clerk in Red Bank, N.J. He recalls an uneventful childhood in a white-trash town, where he watched hours of TV, read comic books endlessly and went to Mass on Sundays. After a semester of college and four months at Vancouver Film... See All