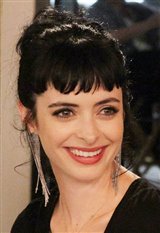 KRYSTEN RITTER Date of Birth: December 16, 1981 Former model-turned-actress Krysten Ritter has had a whirlwind life in show business and the stunning raven-haired beauty has ended up exactly where she wants to be, in the world of acting. Krysten was born in Bloomsburg, Pennsylvania where she lived on a beef farm with her mother, stepfather and sister. She was discovered by a model scout in her local shopping mall at the age of 15. By the time she was 18 Ritter moved to New York City, had signed... See All