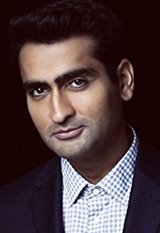 Stand-up comedian and actor Kumail Ali Nanjiani was born in Karachi, Pakistan and is best known for the movie The Big Sick (2017) and HBO’s Silicon Valley (2014 to 2019). At the age of 18 Kumail moved to the United States and attended Grinnell College in Iowa, graduating with a a double major in Computer Science and Philosophy. Kumail became a huge fan of Hugh Grant, whose performance in the 1994 hit movie Four Weddings and a Funeral inspired him to start his stand-up career. Kumail landed his... See All