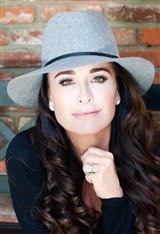 Kyle RichardsDate of Birth: January 11, 1969Kyle Richards began her career at a very young age. When she was still a baby, her older sister Kim Richards already had a starring role on the popular 1970s TV series Nanny and the Professor. When Kim was cast at the age of 10 in the Disney feature film Escape to Witch Mountain (1975), Kyle was cast as the younger version of Kim's character in flashback sequences. The role was uncredited, but soon after, Kyle was cast in a two-part episode of the... See All