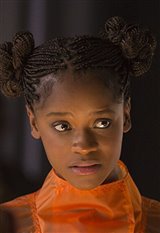 Letitia Wright was born in Georgetown, Guyana before her family relocated to London when she was seven years old. As a child, she felt she didn’t see many women who looked like her on screen until she saw Keke Palmer in Akeelah and The Bee (2006), which inspired her to pursue a career in acting.Letitia sent emails out to different agents until she landed one and eventually began to be picked for small parts. Her breakthrough role was in My Brother the Devil (2012), in which she played the... See All