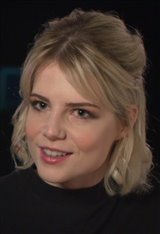 LUCY BOYNTON Date of Birth: January 17, 1994 Lucy Christabel Boynton was born in New York City to British parents Graham Boynton and Adriaane Pielou, both travel writers. At the age of five, she and her family moved back to London, England. She became interested in acting at age 10, when she was inspired by her drama teacher. Lucy would land her first professional acting role at the age of 12 in the British-American film Miss Potter (2006), playing the young Beatrix Potter. Her performance would... See All