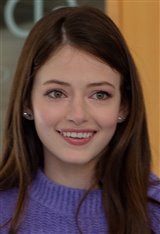 MACKENZIE FOY Date of Birth: November 10, 2000 Mackenzie Christine Foy began her career as a child model at the age of four, appearing in ads for big brands such as Polo Ralph Lauren, Gap, and The Disney Company. She made guest appearances television shows like 'Til Death (2009), Hawaii Five-0 (2010) and FlashForward (2010), before landing her breakthrough role as Renesmee, the daughter of Bella and Edward Cullen in The Twilight Saga: Breaking Dawn - Part 2 (2012). Since then, Mackenzie has... See All