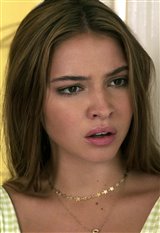 Madelyn Cline is an American actress and model hailing from Goose Creek, South Carolina. Growing up, she would spend summers in New York City getting exposure to the entertainment industry through appearing in commercials for prominent brands. She started modeling at age 10. Madelyn enrolled at the Coastal Carolina University before dropping out in 2017 to pursue acting. She moved to Los Angeles against her parents' wishes, but after earning significant roles, they came around to support her... See All