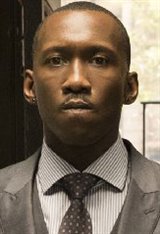 MAHERSHALA ALI Date of Birth: February 16, 1974 Mahershala Ali is an American actor best known for his work in the Netflix series House of Cards and films such as The Curious Case of Benjamin (2008) and the final two installments of the Hunger Games franchise. Born Mahershala Gordon in Oakland, California, to a Christian mother, Mahershala was named after the biblical Maher-shalal-hash-baz, the second son of the prophet Isaiah. Despite being raised in the Christian faith, Mahershala eventually... See All