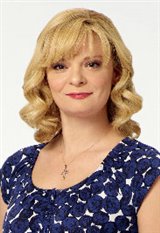 Martha Plimpton Date of Birth: November 16, 1970 The daughter of actors Shelley Plimpton and Keith Carradine, Martha Plimpton was raised by her mother in New York after her unmarried parents split before she was even born. But her parents had certainly passed on the acting gene as Martha hooked up with a film-acting workshop group when she was only eight and landed her first TV commercial at 11—a controversial Calvin Klein jeans ad. One of her first appearances on the big screen was in the... See All