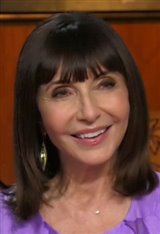 MARY STEENBURGEN Date of Birth: February 8, 1953 Southerner Mary Steenburgen moved to New York at the age of 19 to become an actress. While trying to get her foot in the door by studying at New York's Neighborhood Playhouse, she worked as a waitress. After six years in New York, Steenburgen got her big break when she was noticed by Jack Nicholson in the reception room of the Paramount offices. She appeared in her first movie as Nicholson's onscreen wife in the Western comedy Goin' South (1978).... See All