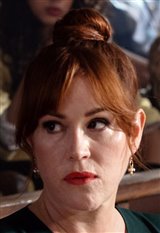 Molly Ringwald Date of Birth: February 18, 1968 The daughter of blind jazz musician Bob Ringwald, daughter Molly began her performing career at age four singing with her father's Great Pacific Jazz Band and recorded her first album -- "Molly Sings" -- when she was just six years old. By the age of five, the Sacramento, California, native was also appearing on TV where she was a member of the New Mickey Mouse Club. She joined the West coast touring production of Annie, playing one of the orphans,... See All