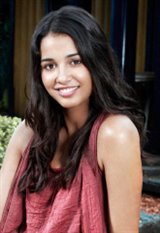 NAOMI SCOTT Date of Birth: May 6, 1993 Naomi Scott was born in London, England to parents Usha and Chris Scott. Her father is a British-born minister and her mother, who has Gujarati Indian origins, emigrated to the U.K. as a child. Naomi proved to have singing talent from a young age and performed in many concerts and musicals at Devanant Foundation School. When she was 13, her drama class was asked to break into groups to write a play based on a Bible story. Naomi took over, writing the script... See All