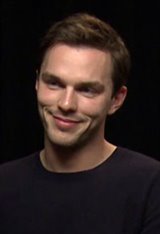 NICHOLAS HOULT Date of Birth: December 7, 1989 Although he rose to international fame when he starred as Marcus Brewer opposite Hugh Grant in About a Boy (2002), Nicholas Hoult had actually already appeared in a dozen films and TV productions before that. Born in Wokingham, England, his first acting job came at the age of six in the Fox Searchlight motion picture Intimate Relations (1996), starring Julie Walters and Rupert Graves. Guest appearances on numerous British TV series followed, before... See All