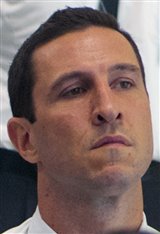 Pablo SchreiberDate of Birth: April 26, 1978Canadian-American actor Pablo Schreiber was born in Ymir, British Columbia to Lorraine, a Canadian psychotherapist, and Tell Schreiber, an American actor. His half-brother is actor Liev Schreiber–Tell's son from his first marriage. Pablo was named after the Chilean poet, Pablo Neruda. When he was a teenager, his family moved to Seattle, Washington where he attended high school and played on the basketball team.After graduation, Pablo went on to attend... See All