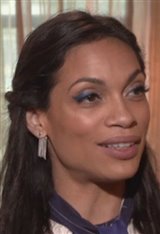 ROSARIO DAWSON Date of Birth: May 9, 1979 Born in New York, Dawson was discovered while hanging out on the stoop in front of her New York City building. Filmmaker Larry Clark was making the independent film Kids when he was immediately captivated by her and urged her to audition. Dawson did, and landed the role of troubled Ruby. Her work led her to more roles in other independent films, Side Streets, and Girls Night Out. Indies led to big budget films and in 1998 she landed a supporting role in... See All