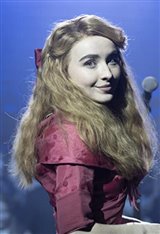 Sabrina Carpenter grew up in East Greenville, just outside Philadelphia. She began singing at a young age and at age 10, she began posting videos of herself singing on YouTube. After seeing the Disney Channel TV series Hannah Montana, she expressed a desire to act as well. In 2009, she entered a singing contest run by Miley Cyrus and was the youngest contestant to finish in the top four. She eventually placed third. In 2011, she landed her first acting role with a guest appearance, playing a... See All