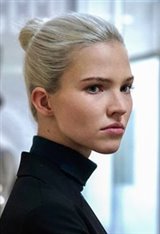 Sasha Luss Date of Birth: September 27, 1992 Sasha Luss is a Russian model-turned-actress. Born in eastern Russia, she moved with her family to Moscow at a young age. Rather than modeling as a primary interest, Sasha preferred to spend her time on her hobbies, which were writing and dancing. She was a frequent participant in ballet competitions until she suffered an ankle injury, which prevented her from continuing competitively. It was only due to the large amount of compliments regarding her... See All